istaran budget hotel have variety of rooms from standard, cabin, and dorm-type rooms. All rooms are airconditioned with individual toilet and bath, shower heater, bidet and stainless bar hangerfor wet clothings. All are equipped/installed with flat TV, cable connection, wall fan, cabinet, side and coffee table. Soon this 2012, all rooms will be installed with intercom and the entire hotel will be equipped with CCTV. The entire municipaliy of Caramoan has no telephone service. 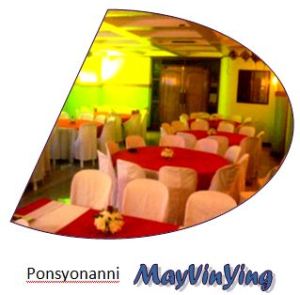 istaran budget hotel has a function hall named “Ponsyonan ni MayVinYing” which can accommodate up to 150 persons. It is a full airconditioned, granite tiled floor with superb sounds and lights. It has a dressing room, conference area and comfort rooms for male and female. “Ponsyonan” is a bikol term for the place of activity while “ponsyon” is the activity itself. Ponsyonan can hold various ponsyones such as meetings, seminars and conferences; birthdays and various family affairs; movie analysis, pageant and other contests; and, other social gatherings. For a gathering of 50 persons and above, Ponsyonan ni MayVinYing is the only place that can offer airconditioned function hall in Caramoan sentro.

MayVinYing is sillabicated as “May” a respectfull call to an old woman. “VinYing” is the matriarch of the family cordial with full name Virginia “Vinying” Herrero Cordial. The family Herrero owns the land where the former RIVERSIDE THEATRE, now istaran budget hotel is erected. Her husband Carlos “Caloy” Cordial, a businessman and a politician who once became a vice mayor then mayor of Caramoan established the first and the only cinema house in Caramoan called Riverside Theatre.

The transformation of Ponsyonan ni MayVinYing for several decades passed several stages. When cinema operation was no more economically viable due to the introduction of betamax, VCD and now DVD players, the place was converted into function hall named DacAngels function hall. The daughter of theatre owner Jennifer Cordial Naval and her husband Angel Naval converted the once cinema house into a function hall. In the late 1980s, DacAngels function hall used to be the first and only function hall in Caramoan as venue to various occasions. “DacAngels” is named after the three (3) children of Jennifer & Angel Naval …. David Carlos (DaCa), Angel, Jr. and Jennifer Angel. Lump them into one is “DacAngels”.

The Manapot river is just at the back of the theatre hence the “Riverside theatre”.

istaran comes out for several firsts in the Municipality of Caramoan. The first accommodation facility in Caramoan or even in Camarines Sur to bear Bikol signages. The first and only fully airconditioned function hall accommodating above 50 persons. The first to be accredited by the Department of Tourism and soon this 2012 as covered by the incentive package of Bureau of Investment.   istaran budget hotel is compliant of all national and local regulations since construction until its operation. istaran budget hotel can proudly say “It’s more fun here in Caramoan, patronize the compliant, stay at istaran”

Some Bikol signages prominently placed else where in the hotel are: “Baye” for female. “Lake” for male. “Ponsyonan” for place of activity. “Paluwas” and “Palaog” for exit and entrance. “Maogmang Pag-abot” for welcome. Menu sheet where you can find pinakiri-kiti (sizzling); kusido (sinigang);  linabonan (steamed or boiled); TapBadSiGoc – tapa, badi, sinanlag, sogoc (daing, sinangag at itlog), tasigoc, longsigoc, etc; Kinonot – ginataang pating (shark meat in coconut milk); Bicol express (a bikol delicacy of hot chili  with small amount of pork meat in coconut milk); Tinoktok – pinangat (a freshwater shrimp or crab (talangka) finely chopped wrapped in several layers of gabi leaves in coconut milk); Seaweeds atsara special; and,  many other locally made dishes and kakanin.

istaran budget hotel promises a breathrough in tourism related facilities. Despite frequent brown-out in the place, it is a brown-out free hotel and wi-fi ready all the time. It’s committed  to provide special activities in its airconditioned function hall such as movie shows, live performances, Pay Per Views, eat-all-you-can, public ballroom dancing, seminars and training workshops.

istaran budget hotel is designed by Architect Virgilio Montero of Nabua, Camarines Sur as commissioned by owner spouses Angel Naval and Jennifer Cordial Naval, CPA (DBP Accountant), the daughter of Carlos (Kape Caloy) and Virginia (MayVinYing) Cordial. Jennifer takes charge of the financial operations while Angel, a Provincial Board Member of Camarines Sur, takes charge of the construction and general operations of the hotel and its related services.

istaran budget hotel is a two-storey building where the function hall and coffee shop, administrative office and frontdesk  are all located at the ground floor. At the second floor are 12 rooms, receiving lobby with 4 sofa sets, various indoor games facilities, prayer area and spacious hallway in-between rooms. Wellness area (mini gym) can be found at the rooftop. A fireman’s pole is intalled from the rooftop to ground floor to add enjoyment to kids sliding down from the rooftop without taking the stairs but kidding aside, it serves as the emergency exit to those at the rooftop. The hotel is compliant of fire safety and emergency facilities. The function hall has 5 big doors, Second floor has 3 exit stairs with fireman’s slidepole. The rooftop has 1  stairs plus the fireman’s slide pole. Exit diagrams are placed in every room and elsewhere in the  building. CCTV and smoke detector gadgets are strategically installed in the whole hotel building.

istaran budget hotel is centrally located at the poblacion at Barangay Tawog. It is just 5 kms away from Guijalo Port, the entrance and exit way to and from Caramoan. The St. Michael the Archangel Parish is 250 meters and the municipal hall is just 750 meters away.